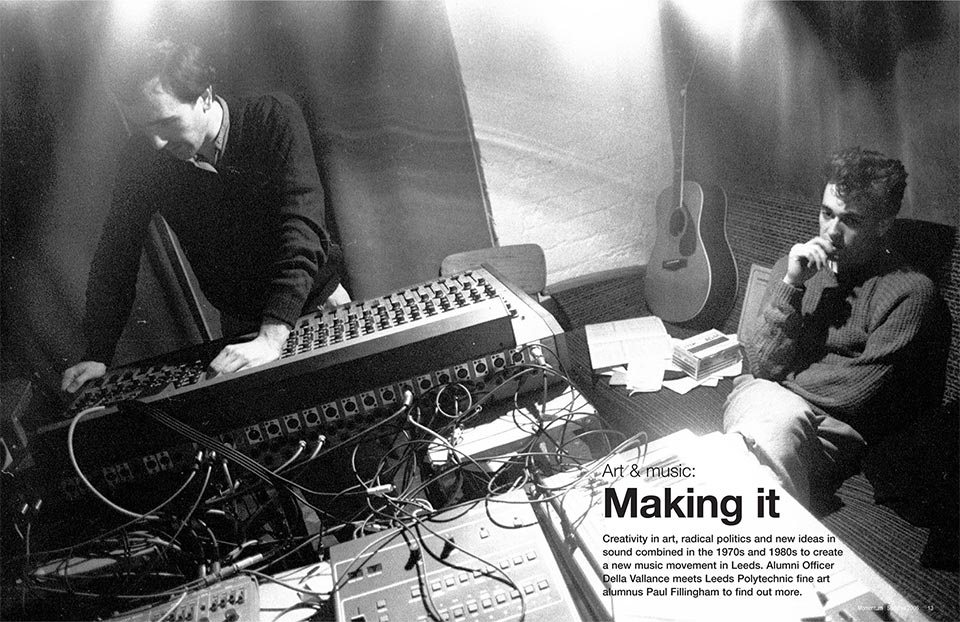 Leeds Polytechnic Alumnus Paul Fillingham recalls the politically charged atmosphere in Leeds during the late70s and early 80s. “Yet arriving in Leeds at the start of the 80s was a sobering experience for a young art student from Nottingham. The atmosphere was unexpectedly dark and angst-ridden. The Yorkshire Ripper loomed large; he had just murdered a young university student in Headingley.”

Into this unrest, Punk and New Wave movements had emerged, making an enduring impression on British culture and sowing the seeds for the musical revolution that was about to take place in Leeds during the 80s with the emergence of Soft Cell.

The focus for this creativity which fostered so much talent during the period was the Leeds Polytechnic School of Art. The Polytechnic had been created in 1970 bringing together a number of separate colleges including the prestigious Leeds College of Art. Founded in 1846, the College of Art attained a reputation for excellence which fostered, in the early decades of the twentieth century, a group of prominent artists and sculptors including Henry Moore and Barbara Hepworth.

Today, Leeds Metropolitan University Faculty of Art & Society, like its predecessors, has a reputation for open-mindedness to students’ approach to study. This reputation has attracted art students with progressive views, resulting in a constant stream of talented but often avant-garde artists and musicians emerging from its courses.

Some of those who studied in the 70s and 80s became part of the historic movement of politically motivated, post punk synth pop. Bands like Soft Cell, Ultravox, Scritti Politti, the Mekons, Fad Gadget, CUD and the Three Johns were all associated with talented art students and lecturers from the Polytechnic Art School. The turn of the 21st Century has seen further talented artists rising up in the music scene with multi-award winning Kaiser Chiefs and up and coming indie band Blackwire linked to the Leeds School of Contemporary Art & Design.

The city into which these 70s and 80s bands first emerged was one burdened by a weight of social and economic upheaval. Unemployment was increasing and anxiety was rife, with the city living under the shadow of the Yorkshire Ripper whilst the National Front and Anti-Nazi League vied with each other for ideological bragging rites – often resulting in violence.

Small venues like the FForde Green and the Cosmo Club were integral to the rise of independent bands, whilst Leeds Warehouse provided an inspirational showcase for recent record company signings. In 1982 riding the wave of excitement that swept the region, the BBC produced a documentary entitled ‘ A town like New Orleans’ featuring several art school bands from the period and current Head of School, Geoff Teasdale. Defending the school’s role in the development of the era’s independent musicians, Geoff stated that “any viable activity, cultural comment, any cultural concern can be considered as art.”

Polytechnic students tended to avoid living in the student residences, preferring to live in more culturally diverse areas like Chapeltown and Meanwood. This is true of Soft Cell frontman Marc Almond, whose life in a damp Chapeltown bedsit is portrayed in his autobiography, ‘Tainted Life’.

Marc and fellow Leeds Poly art student Dave Ball developed their synthesiser-based musical style while they were students at the Polytechnic and went on to make the highest selling British single of 1981, ‘Tainted Love’. Pioneers of the electro-pop movement in the eighties, their legacy is still visible in many of today’s bands. Soft Cell’s live shows provided a contrast to the traditional rock norm of the time, with Almond’s early stage act characterised by attacks on consumer society and gender stereotypes, backed by an audio visual show created by fellow Leeds Polytechnic student Steve Griffiths.

Paul Fillingham started his own post-punk band ‘Smart Cookies’ with fellow students Russ Fisher and Robert Smith using facilities provided by the art school. He remembers: “The Fine Art department had its own recording studio. Set up by lecturer John Darling, the studio was a ramshackle collection of two-track reel-to-reel tape machines, analogue effects boxes and an unfathomable patch-bay. Darling was responsible for Soft Cell’s debut recording ‘The girl with the painted leather face’ which appeared on the Some Bizarre record label. The carefully crafted track almost never made it when a section of tape was accidentally erased during the recording process. 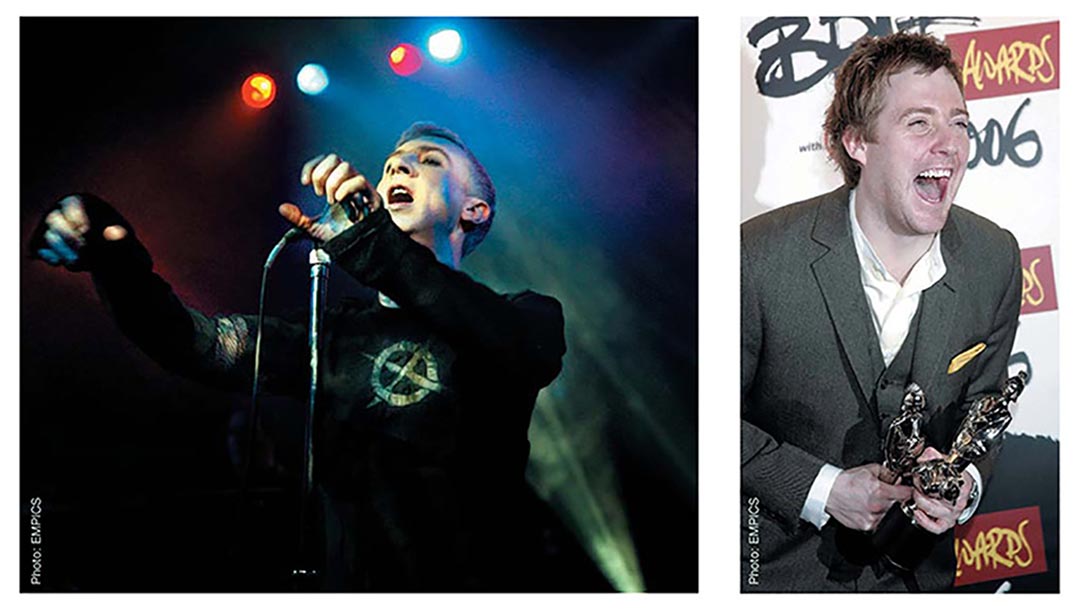 Fine Art graduate of 1977, Green Gartside, founded and fronted the band Scritti Politti together with fellow Fine Art student and drummer Tom Morely. Scritti Politti released several top-five tracks during the eighties. The name Scritti Politti was chosen as a homage to the Italian Marxist theorist Antonio Gramsci. Frank Tovey, who performed under the guise Fad Gadget, graduated with First-class honours in 1978. Frank who died in 2002, was one of the pioneers of synthesiser music in the late seventies just before Marc Almond and Dave Ball came to study at the Poly. In interviews Green Gartside remembers the Poly as radical, with the majority of students producing critically-driven and theoretically informed art. At this time Art School bands played regularly in the Polytechnic Bar and the Fine Art performance area.

Carl Puttnam who graduated Fine Art in 1987 formed three-piece cult band CUD which found fame in the North of England in the late eighties. Carl a performance art student remembers being introduced to fellow students William Potter and Mike Dunphy. He went on to start the band after Fine Art lecturer, John Hyatt, lead singer of the Three Johns, approached him with a challenging project to make ‘art out of noise’. John Hyatt, now Professor John Hyatt, had a Henry Moore printmaking fellowship at the time.

The Art School’s musical heritage, clearly, was not restricted to students. Graphic Design tutor Kevin Lycett achieved acclaim with The Mekons. Likewise Dennis Leigh, an influential tutor in the early nineties, aka John Foxx, pioneered dance music in the early eighties and was also founder member of top-ten chart-toppers, Ultravox.

Two decades later, a band whose music is influenced fittingly by, amongst others, Soft Cell, emerged. The Kaiser Chiefs, fronted by Ricky Wilson, who studied Graphic Art & Design at Leeds Met and graduated in 2000, have seen their idiosyncratic artistic and energetic theatrical performance style take them from relative obscurity as rock band ‘Parva’ to multi-award winning superstars over the last few years.

Ricky Wilson was an honoured guest at this year’s Faculty of Art & Society end-of-year festival at which another year’s students’ work was on public view. This year’s graduates continue to show the same progressive and creative thinking evident in the output of our art students of previous generations, including that of the 1970s, modernists like Henry Moore in the early 20th Century and back to the foundation of the Leeds College of Art in 1846. Undoubtedly, this reputation for unrestrained creativity in art and music still makes Leeds Met the place to be.