1983 was a busy year for the Smart Cookies. We worked hard in the Polytechnic sound studio, composing new songs and developing a more pop-orientated sound – in June we performed at Leeds Polytechnic and later in August we were booked to appear at Nottingham Palais – by then, Chris, Bob and myself were working as a three-piece, having split from our keyboard players Russ and Rose as our fine art course came to an end.

The new line-up remained in Leeds to concentrate on rehearsals and write fresh material for a demo tape. With Bob and Chris working far closer than ever, songs were becoming more guitar orientated. The new romantic movement was dead and we were increasingly drawn to artists like The Smiths and Aztec Camera who possessed a distinctive discordant guitar sound. Russ and Rose had noticed their diminished role within the band but nevertheless thought the that we had developed a cohesive sound that was worth pursuing. Bob however, took an altogether more pragmatic view. The guitar/synth split came to a head when he expressed a desire to bring everyone under one roof where we could work together, something that neither Russ nor Rose could commit to.

Losing Russ and Rose was a bitter pill to swallow, particularly as we were only a few weeks away from a headline gig at Nottingham Palais. Rough Trade record producer Rob Worby, was shocked when we told him that Russ and Rose were no longer in the band. He said that our Leeds Poly gig was a milestone performance. We went over to Worby’s loft one evening to discuss our future plans and he told us that he could probably get us a US tour with the Mekons.

Rob told us about us about a new multitrack studio that was being set up in the basement of a Leeds music shop. There, we met Ian Booth, a recording engineer who had previously worked with Bill Nelson (originally part of Be Bop Deluxe). Ian was a really patient guy, he warmed to us – and agreed to help mix drum-tracks for our forthcoming Palais gig.

We worked in the basement studio for free and sometimes helped Ian out in the shop.That summer, the store began to receive supplies of a new type of electronic instrument – these were digital devices, shipped from Japan and we took several keyboards and drum machines down into the basement to create the backing track for the Palais gig.

The Yamaha DX keyboards and sample-based drum machines like EMU-systems’ Drumulator were far more advanced that anything we had used before – fully programmable, and unlike our TR808 Rhythm Composer – could be easily synchronised with other devices with a MIDI controller. I spent a great deal of time pouring over instruction manuals in order to become proficient at sequencing these devices and learned about the new MIDI (Musical Instrument Digital Interface) standard and how it would soon be possible to hook them up to a home computer to make music. 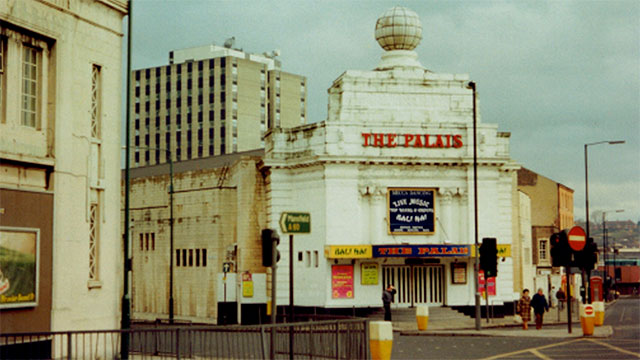 The Palais gig was a great success, largely as a result of extensive fly-posting by Chris Cooper and airplay by Palais DJ Jon Dobson and Rock City DJ Darren Scothern. Riding a wave of teenage hysteria the Cookies seemed unstoppable. We resolved to stay on in Leeds for a while longer to record a three-song demo with Ian, with a view to getting it on the desks of London record companies.

However, our optimism was short lived, and the next few months proved to be extremely challenging. In the summer, Chris got married and the presence of his spouse created a tense atmosphere. Bob had to plead with Chris on several occasions to continue with the band. Eventually, we expelled all non-band members from the house so that we could concentrate on the demo. But as the weather grew colder, and the songwriting more intense, the house began to feel more like a prison and songwriting a chore. We were also broke and that compounded our isolation even further – curtailing social activities at the Phonographique and Leeds Warehouse, and Rock City, the Imperial and the Palais in Nottingham. We did however become adept at buying cheap vegetables and cuts of meat from Leeds Market at the end of the day. On one occasion Bob returned from Leeds market with a bag of offal that gave off such a pungent smell of ammonia that we christened them ‘piss steaks’ – they were so bad that even next door’s dog turned his nose up at them when we slung them into the back yard.

Our Victorian terrace had a large utility area or skullery which separated the kitchen from the lounge, and we appropriated this space for chopping up wood that we could burn in order to keep warm. By November we were dragging entire trees in there, stolen from communal bonfires.

Just off the utility area was a small parlour that we called the slug room. It contained lots of rolled up paper and some old bedroom furniture, including a bed. The slug room wardrobe and chest-of-drawers were the first to get the chop in a sequence of events that would see each room in the house being systematically emptied of combustable material. In common with many guests, Chris used to sleep in the slug room before he moved into the house as a permanent resident. The crumbling, damp wall underneath the window was a haven for slugs, and if you went into the room at dawn, you would find them climbing up the walls and everywhere. To ensure that our guests were slug-free sleep, we isolated the bed with a huge circle of table salt. – In the morning there would be shiny trails over the rolls of paper, the furniture, walls, carpet and bits of polystyrene, etc, – but they never once crossed the salt barrier.

Until our art courses were well and truly finished, we never quite appreciated the social value of the studios and our fellow students. Now, incarcerated and dodging DHSS benefit investigators, we were losing weight, losing our hair, and frequently – losing our temper. It’s true, that things were hard and that room-by-room, we were burning furniture to keep warm, but the thrill of walking through a wardrobe wielding an axe was an unforgettable experience.

Sometimes whilst working late, delirium would set in and we would just end up laughing at our predicament. This bohemian existence was life affirming but at the same time quite tragic, and when I penned the lyrics to ‘Loud and Lonely’  it was really all about the sorry state we found ourselves in.

At the end of November, I finally closed the door on the empty shell of Sholebroke Mount and returned to Nottingham where I moved in with my girlfriend’s family, resigning myself to finding work. I was depressed, weighed around seven-stone and was in bad health – our dream targets really were ‘so distant now’. Chris similarly dishevelled and beaten, resigned himself to married life, and with a child on the way, had to find work. Meanwhile, Bob moved to London and was touting our demo tape around the record companies. One reviewer wrote ‘Loud and Lonely is Beatleish and beautiful’ and urged record producers to snap us up. But in striving for commercial appeal, it felt as if our essential spark had somehow become extinguished, and like Russ and Rose just a few months earlier, Bob, Chris and myself had to come to terms with the sense of loss that accompanied the end of our creative endeavour.

My Roland TR808 Rhythm Composer was eventually listed in a classified ad and I purchased a BBC Microcomputer with the proceeds,  channelling my energy into learning how to program Basic code. It would take a year or so – but Chris and I would eventually return to  recording music together and we would even make peace with Russ (now ensconced in Leicester) – embarking on new collaborations together – sometimes producing music that was very much the Smart Cookies in all but name.

In 2005 Chris and I decided to rework some of our old songs under the Smart Cookies banner. Compositions were arranged with Logic Pro software running on an Apple Macintosh and many of our favourite old instruments could now be recreated digitally – instruments like the TR808 rhythm composer and classic synths like the Yamaha DX 7.